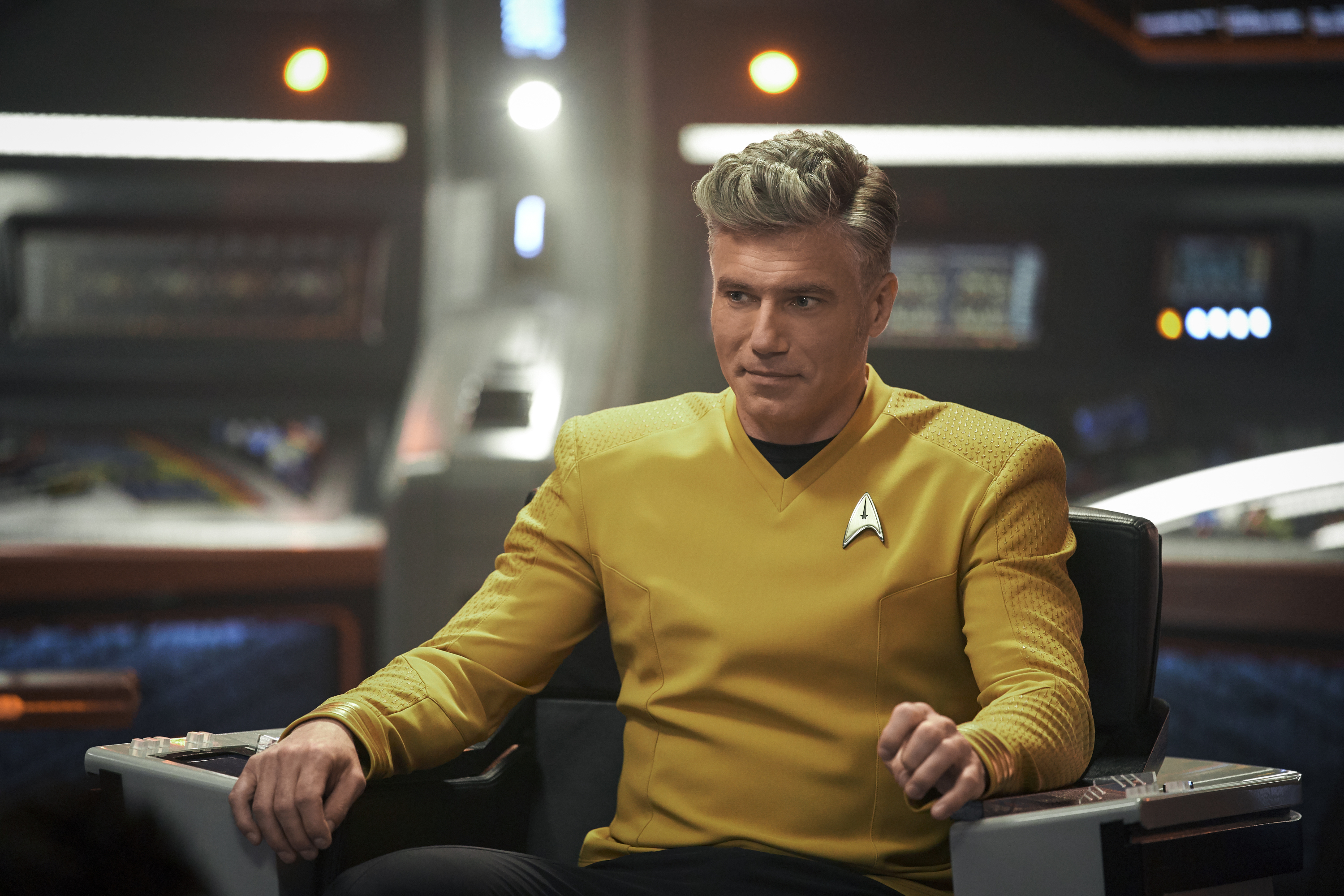 Strange New Worlds feels like a homecoming, and that's both beautiful and bittersweet.

Growing up in Queens as a kid, we didn't have much. Furniture was scarce, I spent a lot of time sleeping on the floor, and the overall conditions were not great. That wasn't because we didn't live in a nice place, it was because my mother was an addict. She had a lot of issues, but she also had two things that helped mold me into the person I am today: an incredible imagination and an undying love for her son.

We did have a television, and one thing I remember about my mother is that she enjoyed Star Trek. Though my memories of really enjoying Trek come from watching The Undiscovered Country, I watched TNG from its premiere on; some of that while I was still in diapers. And when my mom passed away, wherever I wound up, I made my home the Enterprise. I made my home the balcony on the promenade where Jake and Nog would hang out on Deep Space Nine. Somewhere there's a joke in here about making my home in Voyager's mess hall, but no one wants that.

But in all seriousness, being moved from school to school, house to house, Star Trek was my home.

And home is precisely what Strange New Worlds feels like. In the show's self-titled premiere episode, everything feels right; being back on board the Enterprise, her lights, her sounds. The crew that fill the bridge, despite many new additions, feel right where they're supposed to be. Before I go any further, the synopsis for "Strange New Worlds" reads like this:

When one of Pike's officers goes missing while on a secret mission for Starfleet, Pike has to come out of self-imposed exile. He must navigate how to rescue his officer, while struggling with what to do with the vision of the future he's been given.

Yes, Strange New Worlds is an episodic series. Still, it also is directly connected to the first two seasons of Star Trek Discovery, especially when it comes to Captain Pike and the knowledge he has of his eventual dark fate. The show needs to address this for various reasons, the most important of those being the number of layers it brings to a character like Christopher Pike. 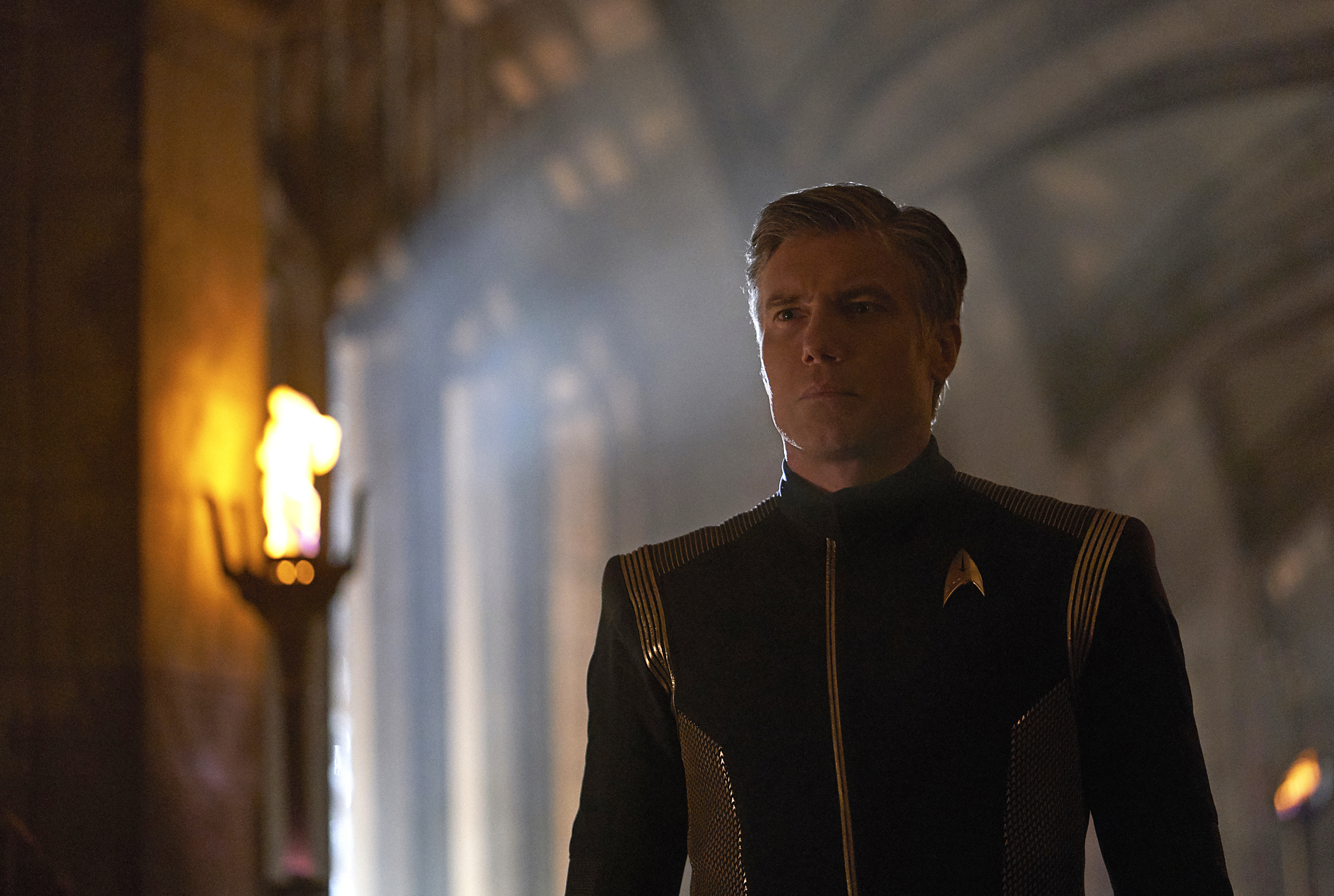 Captain Pike (Anson Mount) moments before seeing his future in the  Star Trek Discovery  season two episode, "Through the Valley of Shadows"

But "Strange New Worlds" wastes no time getting to the point, which is one reason why it feels so much like home. There's a mission, and there's the plan to retrieve the officers. And like any good Trek episode, there's the inevitable wrench in those plans. In this particular situation, that is the reveal that one of the missing officers is Captain Pike's own Number One, Una.

In continuing that recipe of making a great standalone episode of Star Trek, the Captain finds a way to save the day. And he does so by making use of the trauma that is currently hovering over him like a storm cloud. As a massive Anson Mount fan, there's no one better suited to give this rousing speech at the end of "Strange New Worlds" and take the Enterprise's center seat. It's so cliche to say that someone was "born to play" a role, but it's simply the truth when it comes to Mount and Pike.

Of course, there's no great Captain's speech or "save the day" moment without a qualified and bad-ass crew to back him up. Strange New Worlds' series premiere gives all our new crew members (the ones featured in the episode) something to do. We quickly get to know Enterprise's mysterious new chief of security, La'an Noonien-Singh. Although haunted by her past as the lone survivor of a Gorn attack on her colony, La'an is an officer full of confidence and quick on her feet. Every time I watch her feign injury during the away mission with Pike and Spock, I like her more and more.

Celia Rose Gooding's Cadet Uhura also gets a great moment when one of the locals from the planet wakes up in sickbay and makes a run for it. Uhura runs into him, scared and confused in the turbolift, and immediately begins to calm him down using the knowledge she quickly studied about the planet. This quick distraction gives Chapel the moment she needs to knock him back out. 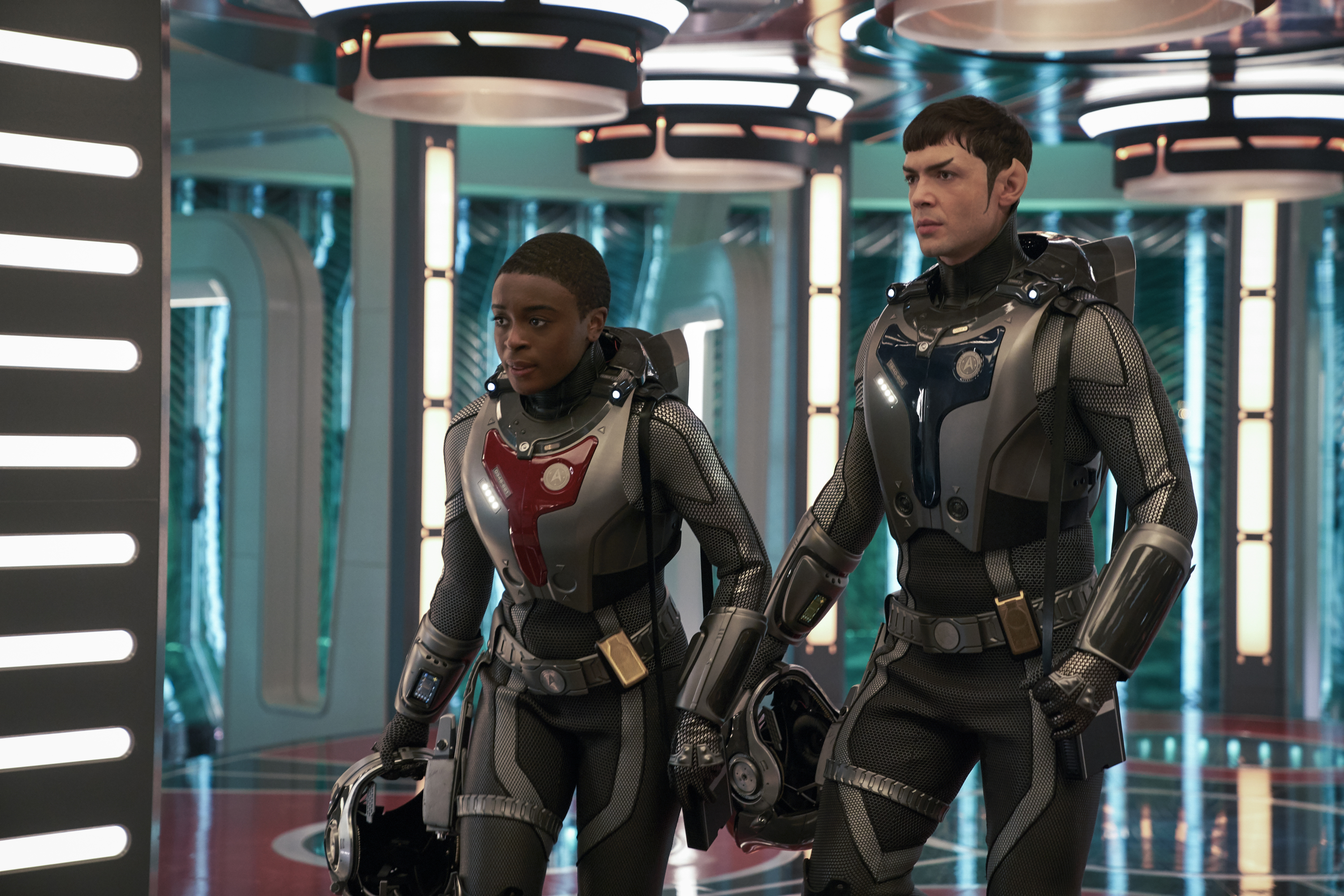 Cadet Uhura and Spock in the second episode of the season, "Children of the Comet"

It's a special moment for a character who we know is highly intelligent. Uhura never really got to use her character's skills in The Original Series, so even though it's a small part of a nearly one-hour episode, it's still one that gives you exactly what you've been hoping for and leaves you wanting more.

I could honestly go into an entire episode review of why each character was able to shine in Strange New Worlds' series premiere, but that's what we have the podcast for. It's such a breath of fresh air (not taking anything away from previous Trek series) to have every member of the Enterprise's main crew contribute in some way to the episode's planet of the week conundrum.

Anyone who listens to the podcast or knows me well enough has to know by now how much I love film and television scores, sometimes even more than the series or film itself. As you can imagine, with the return of the Enterprise, there was a ton of anticipation about the music of Strange New Worlds and the show's main title sequence.

Let's get this out of the way right now. Nothing makes you feel more at home than sitting down, putting on your favorite episode, getting through the cold open, and finally hearing those big notes that lead to Star Trek's main titles. Without amazing music, there's no amazing Star Trek.

If you've watched any of Star Trek Prodigy, then you've also been blessed with the sweet, sweet sounds of composer Nami Melumad's score for that series. Melumad has not only captured the magic of The Original Series, but she has also added a modern flair and her unique sound to Strange New Worlds. Take a moment and think about how stunning Prodigy's score is, and then increase that by a warp factor of ten. All while never letting us forget that the music at its heart is Star Trek.

When I asked Nami what her hopes were for reintroducing fans to the Enterprise and her crew, this is what she had to say...

"Re-introducing the Enterprise to the viewers in the first episode presented a wonderful opportunity to go back to some beloved themes, and that felt like a dream come true! Overall, I was going (sometimes boldly!) for a colorful score that would embody the hope, adventure, and promise that are all part of the original premise of Star Trek.

My goal with the score was to blend the old sound with a new, modern approach to scoring (in spotting, character arcs, motifs, and overall cinematic approach). We recorded the score with a 36-piece orchestra at the Eastwood Scoring Stage at Warner Brothers, although I think for the first episode, we also had harp and oboe (so that brings it to 38!).

Each episode, as you'll see, features new thematic material (because of the episodic nature of the show), as well as reoccurring motifs for the main characters."

Of course, there's the never-ending debate about which Star Trek series has the best title sequence, and that conversation isn't going anywhere soon. While Melumad was tasked with creating a unique sound week in and week out for each episode, veteran composer Jeff Russo (Star Trek Discovery, Star Trek Picard) had the near-impossible task of recapturing the magic of The Original Series theme. Coming up with something unique and fresh yet still paying tribute to TOS, Russo has given us yet another magical Trek theme, and was generous enough to share with me a little about that process...

"All I could think about was wanting to create something unique and give us our own identity all while still staying in that world and making sure we paid proper homage. This is the jumping off point. The time that leads us into what we know so well and I definitely wanted it to feel like a natural progression."

The old saying is, 'Home is where the heart is.' Much like Captain Pike, I like to think home is on the bridge of the Enterprise. With at least two incredible seasons ahead of us, I can't wait to explore strange new worlds. I can't wait to seek out new life and new civilizations. And most importantly, I can't wait to boldly go.

Strange New Worlds is now streaming on Paramount Plus.